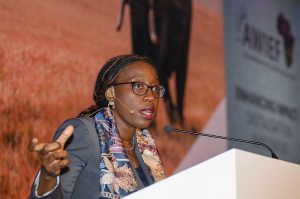 The 5th Annual in October 2019 opened with stirring calls from speakers for women to move from having conversations about economic empowerment to radical action.

Economic activist and social entrepreneur, Wendy Luhabe was vocal in calling for women to look at how they can use the Africa Continental Free Trade Agreement (AfCFTA) to put pressure on countries to include the emancipation of women in reducing trade barriers across the continent and reducing trade tariffs. “As women, we need to move beyond conversations to radical action. We demand to be involved in the discussion around AfCFTA. There is still a window of opportunity for us to be involved.”

Dr Songwe reiterated that giving women in Africa back their dignity, meant ensuring that every woman in Africa had an identity, as many women’s births were never registered and they had no official identity; that women had to have access to structures to access economic empowerment; that women needed to connect as a collective to raise each other up.

“There is a new economic Pan-Africanism on the continent, we have fought for our rights, we now need to move to the economic space. This is the promise: Africa needs skill. In many of our countries, we don’t have the skill required to grow. You need to claim the continent as your marketplace, the $1.2 billion market,” she told delegates. “We can do more, we can do better. We must ensure we can do that together. Can we take these women and make them global businesses?”

“These events help us to connect. We need to ask, did that help me raise another woman somewhere else? That is the power of African women. When we meet as leaders, when we meet in these groups, we need to remember that connecting is the basic human factor. We need to connect with success.

“There are 500 million of us African women, we need to be collectively connected,” Dr Songwe emphasised.

The Africa Women Innovation and Entrepreneurship Forum (AWIEF) prestigious annual conference is taking place at the Cape Town International Convention Centre (CTICC), 29-30 October 2019, for the advancement of women in Africa as innovators and entrepreneurs. More than 60 African and global thought leaders across business and politics will share insight and thought leadership, including headliners from UNECA, World Bank, USAID, CTA, Shell, Nedbank, APO Group, and so on.

This year, the AWIEF Conference, Expo and Awards celebrate its five-year anniversary with the theme ‘Enhancing Impact: Digitalisation, Investment and Intra-African Trade’.

Dan Plato, Executive Mayor of Cape Town declared the conference open on 29 October 2019 and congratulated AWIEF on its five-year anniversary and pointed out that entrepreneurship should be supported, particularly women entrepreneurs who were in many instances their main breadwinners. Entrepreneurship allows people the chance to forge their own economic futures, he said.

“Entrepreneurship should be seen as one of the solutions to unemployment and it is crucial that they should be given support to get their businesses up and running. In South Africa, nearly 7 million people are unemployed, 29% of the population,” Plato said.

During the morning plenary session, Virginia Blaser, Consul General, US Consulate Cape Town, recounted how she refused to continue her participation at a forum that had no women delegates and suggested that women do not participate in forums that don’t include women and don’t sign off on grants that don’t include women. “When women are economically empowered, they reinvest in their families and their communities This creates a multiplier effect that undeniably contributes to peace and stability.”

Barbara Makhubedu, Chief Financial Officer, Shell Downstream South Africa, said women must be deliberate on pulling the “levers” as a collective and work hard to grind down the barriers to economic empowerment for women. Those strong levers include the strength and wisdom inherent in women and consolidating efforts and liberating technology to shape a more inclusive financial system in Africa to include women.

Nirmala Reddy, Senior Manager, Enterprise Development, Nedbank, urged women to nurture themselves too, and balance the needs of the heart, family and self. She quoted her favourite poet, Rumi: “Don’t be afraid to give yourself everything you ever wanted”.