Betelhem Dessie: Blazing a trail in AI and robotics in Ethiopia 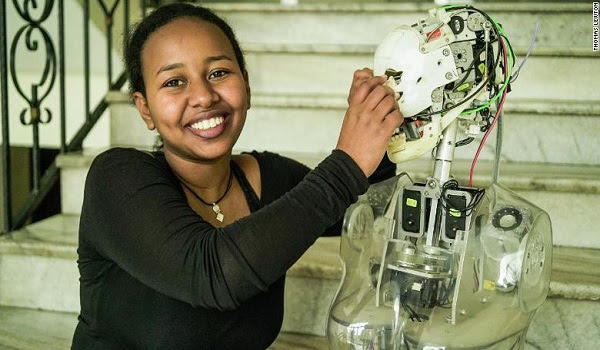 With the emergence of young people in the African tech scene, more avenues are opening up for brilliant young minds to show what they are capable of. No one epitomises the new age of young talented tech leaders more than Betelhem Dessie.

Dessie, who recently turned 20, started working for the Ethiopian Government at the age of 12 and she hasn’t looked back since.

Betelhem Dessie has been climbing the ropes at “Sheba Valley”, the Ethiopian equivalent of “Silicon Valley”. Her meteoric rise has seen her become the head iCog Labs, an AI and Robotics company in Addis Ababa, Ethiopia.

She developed entrepreneurial skills at a very young age, citing her ninth birthday as the birth of her desire to make her own money. She had requested money to celebrate, from her father, but he didn’t have any to give her. He ran an electronics store in Harar in eastern Ethiopia and she started taking on tasks like video editing and copying music to customers’ phones.

“I got about 90 dollars, then I celebrated my birthday,” she was quoted saying on CNN. Before long,  she started expanding her horizons in computer maintenance, installing software and eventually into coding.

Dessie currently has four patented projects under her belt and has three more in collaboration. She was named as the “the youngest pioneer in Ethiopia’s fast emerging tech scene” by CNN.

Dessie heads a number of projects at iCog Labs, including Sophia the robot. Sophia the robot, the humanoid robot that came about as a collaboration between iCog Labs and Hong Kong-based robotics company, Hanson Robotics. Sophia the robot has a Saudi Arabian citizenship, additionally can make up to 60 facial expressions and also has the ability to carry a conversation. (Source: This is Africa).

With an ambition to get more young people into tech, she leads a program called “Solve IT’. The program looks to involve young people in finding tech-based solutions to problems affecting the community. She also runs an intitiative called, Anyone Can Code. It is a learning program where young Africans are taught the basics of artificial intelligence, robotics, blockchain and other emerging technologies.

Moving forward with her work with Sophia the robot and her numerous projects, Dessie has expressed her desire to inspire the next generation of African coders, especially girls.